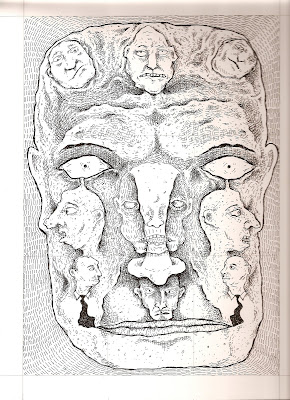 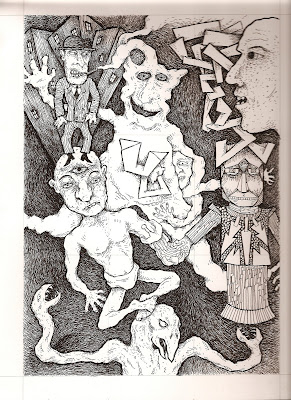 I haven't been on the horn since the COMIX show, which was a blast to be a part of and was really well attended. In that time period, letter press printmaker Alex Brooks did a mighty fine profile on me for the March issue of the local rag Chevy Chaser, which also plugged the aforementioned COMIX show, which was on display through the end of last month.
And Andrew Crawford did a benefit concert for his comics publishing venture, Qhamics? (the first issue of which will feature pages by yours unruly) this past weekend that featured my band, the Smacks!, and he was selling original art in a handy trading card format to help raise money...my idea was to make a design in which each small image was part of a complete image. Andrew was kind enough to scan them for me before he sliced and diced 'em, so I present them here (a few of the cards are left at the bargain price of 2 dollars each...drop me a line if interested).
There's plenty of material in my sketchbooks to keep the Covertly train on track for ages...unfortunately I have computer issues, and it's unclear exactly when I'll have them sorted to make this thing a regular gig again. So keep your pantyhose on, and I'll be scanning and uploading like it's my day job as soon as that's possible.
Posted by J.T. Dockery at 5:50 PM 1 comment: