Thanks to all who made the In Tongues Illustrated book release one heckuva party in Lexington, Kentucky this past weekend.

As for right now, it's off to SPX I go this weekend.

Unfortunately, due to the fact that the home computer is in the shop , and it was not back as soon as it was reported to be, I have been out of the cyberspace realm, and, as a consequence, I am behind on getting the rest of the ITI related images posted. As soon as I do (I'm borrowing a pal's laptop just to catch up on the basics), whenever the hell that is, the first ten copies marked A-J with the original drawings will be up here, in addition to a few more sketches.

'Till then, enjoy the Wallace Wood perennial favorite above. 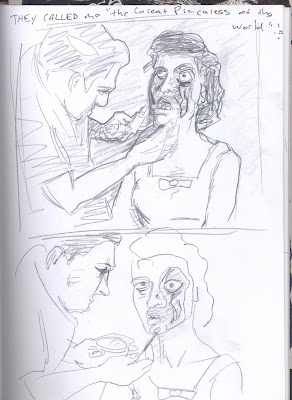 Above is the pencil roughs for blocking out the second page of "The Lives and Times of Mona," which is the third page in a cycle about the Mona character that acts as a prologue to the "Blood Around the Heart" story. The inspiration came from photographs from the Bob Burns collection of a lady in the process of getting her monster make-up applied.
Posted by J.T. Dockery at 8:42 AM No comments:

The Infancy of Misericordia the Misologist 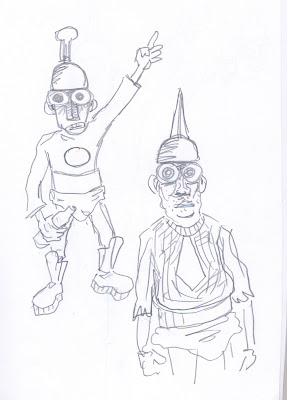 The name came before the image this round, so I had to go searching for the man to fit the name.
Posted by J.T. Dockery at 8:38 AM No comments: 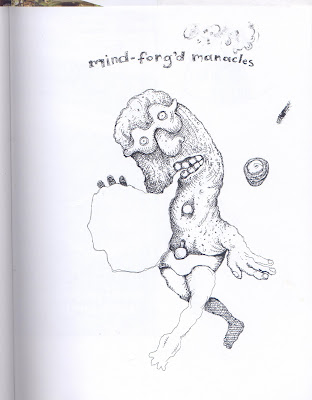 Move the Blake quote into the word balloon and then one has, "Floppy the William Blake scholar and tumorous dance instructor."
Posted by J.T. Dockery at 11:30 AM No comments: 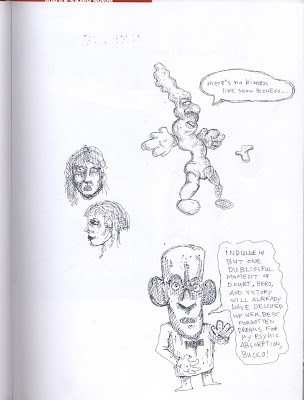 First appearance at bottom right of Professor Blankwind, author of My Mother, The Whore. 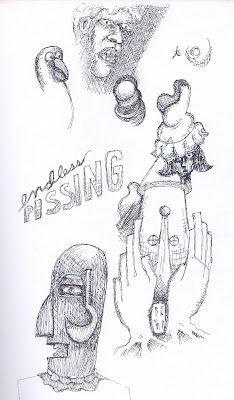 Amongst the "Endless Pissing," we have he who would be, "Dr. Sellers the iron mask fetishist and arthritis specialist."
Posted by J.T. Dockery at 11:16 AM No comments: 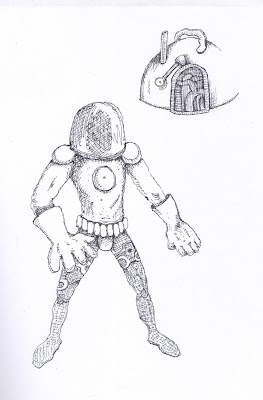 "Phil-O-Tron the Ancient Astronaut from Florida."
Posted by J.T. Dockery at 11:14 AM No comments: 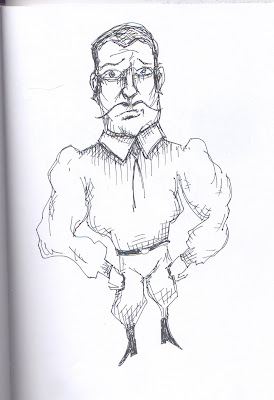 He who would become Rupert, "who claims to be the greatest living expert on obscure venereal diseases." 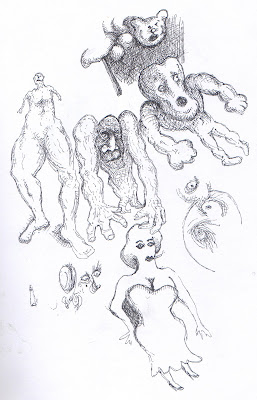 The cast of characters that appear in counterpoint to our main man in "Another Day at the office of Mask Or Machine?" are culled from random imagery in sketchbooks. The above mutated into the carnival family. 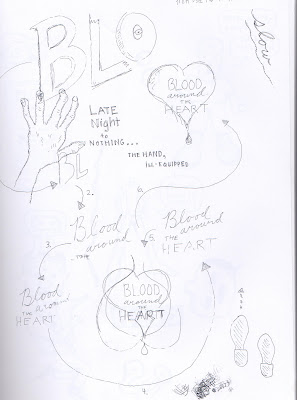 Working out the title design for "Blood Around the Heart," apparently, ye olde arthritis was getting in the way. Cha-cha-cha.
Posted by J.T. Dockery at 11:51 AM No comments: 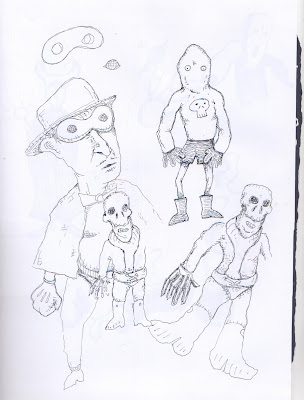 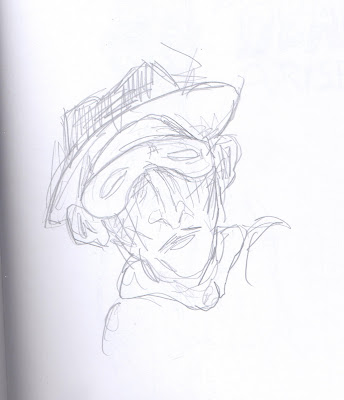 And on the second day (or maybe it was a few minutes later, hell, I don't remember), Jesse Todd recalled upon the squiggles which begat the face that was to be "Mask or Machine?" and verily raised unto his pencil and squiggled again lines that would form his good work.

Mask or Machine? Arises: Part I 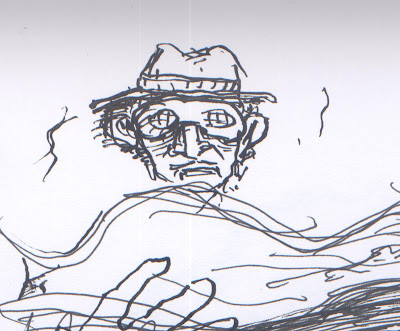 In the maelstrom of a squiggled mass, the face of He Who Would Be Named "Mask or Machine?" appeared. Jesse Todd saw His work. And knew that it was good. 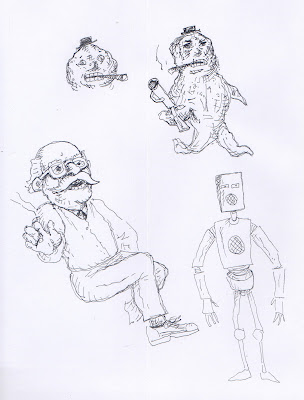 Character design sketches from the process of putting together "The Early Adventures of Jack Lustmord" strip from In Tongues Illustrated. I was recently re-reading Ivan Brunetti's interview from The Comics Journal in which he speaks upong the superiority of the initial doodle. I must say the personality of the strange entity in the hat that emerges from the chminey smoke...I relate to him more in the little sketch than I do in the finalized, over-labored version. Oh well, what can one do?
Posted by J.T. Dockery at 10:09 AM No comments:

The Origin of "Epidermal Epilogue: the Birth of Jack Lustmord IV" 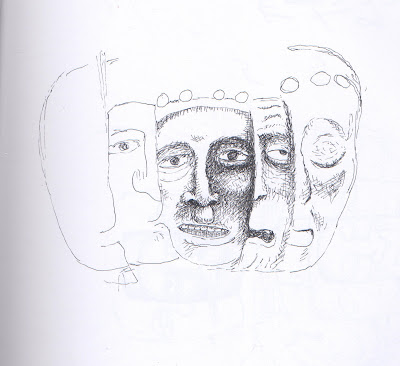 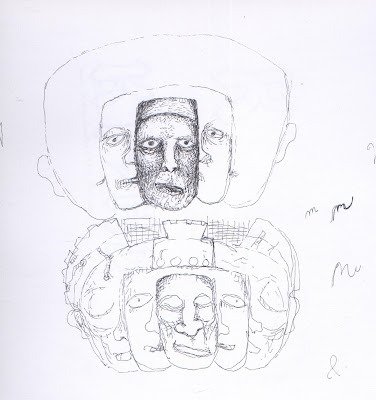 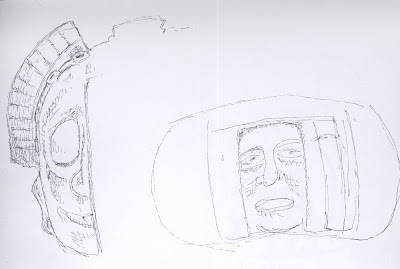 These are the original sketches, of an ancient mask of South American origin, that would eventually lead to the imagery of the last vignette in In Tongues Illustrated. I no longer have the actual source...I believe I was studying this from someone else's magazine while I was visiting he or she (the memory is dim), an article about new archaeological excavations. The image percolated in my mind and aged in my sketchbook, knowing that I wanted to use it for something. Of course, it would eventually wind its way into the last two pages of my book, altered and incorporated into the character Jack's reality principle. 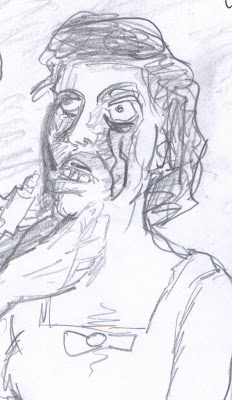 "In Tongues Illustrated is a paper product that, like toilet paper and the Bible, belongs in every home. Buy it and dig it or continue on your dreary way to the mass grave of mediocrity."--Nick Tosches, author of In the Hand of Dante
http://www.myspace.com/nicktosches

In Tongues Illustrated is my fifty page graphic novel meets art book, a signed & numbered limited edition of 250 copies, also including the first ten of which are in addition lettered A-J featuring an original drawing on the back page that can be had for a few extra dollars. The interior is offset printed with a cover that is a combination of offset and letter press (the latter done with artist-printmaker Ben Durham at his Tug & Maul press in Midway, KY), and the book is bound Chicago style, giving it that certain Frankenstein meets rustic primitive visionary essence (and what other essence would I strive for, really?).

In the month of September, I'll be building up the official book release by updating Covertly and by Snatches with examples of sketches that pertained to the development of the In Tongues book, as well as displaying the aforementioned original drawings for the first ten copies marked A-J.

Also tune in to Mick Jeffries's Trivial Thursdays (http://minglefreely.blogspot.com/) program Sept. 25th 7-9AM, the Thursday before the 27th, as I'll be the guest on his WRFL 88.1FM (http://wrfl.fm/) show, talking trash about my book amongst other (ir)relevant flotsam & jetsam, with special guest host Brian Manke.

The weekend of the 27th precedes my sojourn with the book to SPX (a sorta comic convention that's more in line with the underground/alternative/self-publishing tradition than simply the superhero thing) in Bethesda, Maryland (http://www.spxpo.com/).

Lastly, this release party will be bookended on the local Lexington tip with my inclusion in the Lexington Art League's "Comix" exhibition running February 7 to March 28, 2009, with a Gallery-Hop reception on Feb. 20th. If for some reason you can't make it to the release party at Morris Books, keep your dance card open for Feb. 20th.