Comics Round Up #9: The Cole Closser Conversation 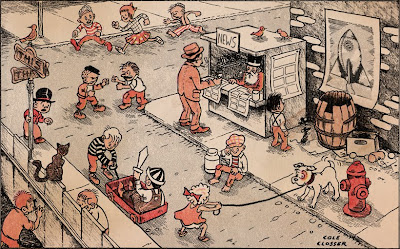 I never really intended to do interviews with the Comics Round Up series, but nine entries into it, and this is already my second interview (the first being with Julia Gfrörer). But what I've discovered with some artists is that the idea of writing about their work lends itself to begging questions and jump starting a dialogue with the artist. In Julia's case it was because I had questions about a specific work, and with Cole Closser it was because I wanted to get a more clear picture about him as an artist in general in terms after having read some of his pieces and meeting him in person in passing in the great white Northeast. Cole was generous enough with his time to answer a few questions.

J.T. Dockery: From what I've seen of your work, there is a real affinity for turn of the century newspaper comic strips on through to 1950s comics: artists like Lyonel Feininger and the playful slang dialogue of George Herriman, Fleischer animation. If it's not revealing trade secrets, and to hit you up with the world's most obvious question: what do you consider your most important influences as an artist and story-teller (and it doesn't have to be limited to just comics artists)?

Cole Closser: Aw, man. Feininger, Herriman, and Fleischer (to a lesser degree) have all definitely had an impact. As far as direct influences go, I'd at least have to list all of the "commonly-named" founding fathers of the American comic strip -- R.F. Outcault, George_McManus, Rudolph Dirks, F. Opper, Jimmy Swinnerton, and several others. I also draw a lot from later guys like Frank King, Roy Crane, and George Storm. It's a hard question to answer, because I could end up listing names for the whole interview. I just love comics, and I love the history of comics.

As far as living folks are concerned, Art Spiegelman and Françoise Mouly had the biggest influence on me when I read RAW as a kid. Later, Tony Millionaire's unbelievable drawing ability and his knack for mixing crass humor with heartbreaking profundity inspired me to finally go from being an appreciator of comics to a participant.

I'd name my older brother, Hotspur, as maybe the biggest influence on my work. He was always the one discovering these things first and then sharing them with me. He's also been my biggest critic and supporter.

JTD: I imagine you to have rural roots, but I don't know if that's true. I know you hail from Missouri, which is just about as contradictory a place as my stomping grounds of Kentucky (and my family on my mom's side actually moved to KY from MO after the Civil War). So where did you grow up? What was your childhood like? One of the reasons I ask this is I imagine you in a barn as a kid discovering some hidden cache of old newspapers and comics and that's what formed you. That said, I realize that's probably a romantic notion on my part. For me, it was Marvel comics as a kid that got me sucked into comics. In this day and age I find it an interesting question to ask artists how they got sucked into this whacky racket in the first place.

CC: I was born in Springfield, Missouri. I spent my childhood between my father there, and my mother in Fayetteville, Arkansas and three tiny towns in middle Georgia. Springfield, Missouri was pretty suburban. We've got hillbillies in the Ozarks, for sure, but restaurants didn't even serve sweet tea there when I was a kid. We didn't have a barn in Georgia, but I spent a lot of time running barefoot, with my dogs, on the red clay between mama's house, the pond, and my uncle's trailer.

You were close on the hidden cache of comics, though. My dad's a literature professor, and his house is lined from wall to wall with books, which overflow into boxes in the basement. When I was ten or eleven, my older brother and I were digging through those basement boxes, on the hunt for girlie magazines, when we discovered RAW, Volume 2. It was mind-blowing. We'd read newspaper comics and Marvel comics,but reading RAW was life-changing. It showed us that comics could be beautiful and terrifying. I'd stay up late, flashlight under the covers, to try to make sense of it all. My brother, Hotspur, carried RAW around in his backpack for weeks. He ordered both Maus books in '91 or '92. He even sent Art Spiegelman a fan letter with a little note card to sign. Spiegelman sent the note card back with a nice message and a drawing of himself in the Maus mask. Hotspur's still got it, of course.

RAW planted a seed in my tiny child-mind of what real comics ought to measure up to. I still read and reread all three of those little Volume 2 books. I'd be re-reading Volume 1 if I could afford it! I suppose I can directly attribute my interest in the history of comics to RAW, as well. That's probably the first place I saw Herriman.

JTD: From Little Tommy Lost to your silkscreened mini-comics, while there is always a common thread, it seems like you pick out a specific approach to the visuals and the printing for each project. Is there any way you can describe your process, how stories and the approach to the art take shape for you? If not in a general way, perhaps describe the process on some of your specific books?

CC: Man, that's tough. I think it's different for every story I work on. Sometimes I just want to pay direct tribute to a cartoonist, like my Sweet Sammy mini that I made mainly as an homage to Swinnerton. Other times, it's the story that leads, and then the visuals and design take shape behind that. Little Tommy Lost is a combination of those. I wanted to do something in the vein of Gray, King, Crane, and Storm, but I wanted to tell a compelling story, also. It's still a work in progress. I've always got five or six books I'm working on, but I don't like putting anything out there until I'm happy with it. I plan to have one of my big ol' secret books out next year.

JTD: In the final product, it often seems like achieving an appearance of a vintage printed comic or newspaper is important to you. I wondered if you could talk, on one hand, of why this appeals to you, and, on another more technical side, how you achieve some of these effects. While I imagine you to start with the classic tools of the cartooning trade, I picture you finishing up on the computer in some cases. Am I wrong? Can you explain to a computer moron how the digital side of things does and doesn't factor into your work?

CC: It's important to me, for sure. I've tried to just do comics with flat colors, but it hasn't felt right to me, so far. There's something warm, complex, and wonderful about the imperfect way that halftoned images look on newsprint. Of course, there's a delicate balance to not making it look like you "Instagrammed" it, either -- and I've been known to go overboard. Also, when I age the hell out of a drawing, it tends to hide my shaky line work.

As for how I make things look the way they look, you nailed it. I work with India ink, nibs, brush, crayon, and Zip-A-Tone on large sheets of vellum Bristol. For the color, it depends on the project. I've used silkscreen and watercolor on things, but I generally prefer to color my work digitally. The process isn't really the same any two times, so it's hard to explain. I'm generally just layering things to try to imitate whatever I'm looking at for reference.

JTD: I've ducked out for a few months back to KY and I'm on my way back VT, but it's no secret you just finished your first year at the Center for Cartoon Studies in White River Junction, VT. Even though we've walked the same streets of the greater Upper Valley and rubbed elbows, we haven't had much chance to talk to each other. How is the Northeast treating you as a Missouri boy? Any thoughts on how a year at the school has impacted your work and/or you view of comics?

CC: We can remedy the talkin' situation awful quick, bud. I know you have a fondness for bourbon.

The Northeast is tough, but my lady and I are growing accustomed to it. The weather is cold here, and people don't always seem very hospitable (compared with the Midwest or the South) when you meet them or pass them on the street. All the same, the mountains are beautiful and there is a rich culture and history that is pretty wonderful to be a part of. White River Junction is also a tiny, tiny town. I think they call it a "village." We took a bus to Boston not too long ago to get more of a feel for New England, and were blown away by the place and the people. We loved it.

One thing I won't hesitate to say about White River Junction is that CJ's is an excellent bar. Great bartenders, good burgers, and generous whiskey pours. Don't tell them I said that, though. They don't appreciate a kiss-ass there.

The school is great. James Sturm is one of the coolest people I've ever met. Steve Bissette knows more about pop-culture history than anyone in the entire world. Jason Lutes is a Zen pen-master. Jon Chad and Alec Longstreth are amazing at keeping spirits up while bestowing vast amounts of knowledge. R. Sikoryak was a visiting faculty member this year, as well -- which was a big damn deal to me. I even got to work with him on the Cartoon Crier anthology.

The most important thing I've gained from the school so far has been a glimpse into the business world of comics. I've been drawing and writing in secret and seclusion (surrounded by old books) for so long, that I had no idea there were so many other aspiring cartoonists out there. I'm an absolute outsider to conventions and the comics world, and CCS has given me a window through which to see how that world works. It's hard to pinpoint exactly how this year has affected my work specifically, because I haven't stopped drawing long enough to look at it, but I know that each instructor has helped me tremendously.

I guess it's the same as any other school in most ways. You get out of it what you put in. If you're listening when the instructors are teaching, and you're studying more than you're partying, then you'll grow as an artist. I've got a long way to go, so you won't see me out very often. 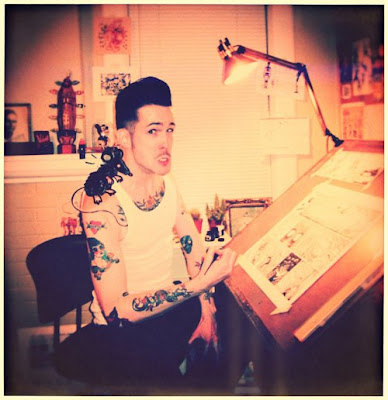