In Tongues Illustrated Future Past #9

The text on this one says it as succinctly as any other crass, throw-away commentary I could concoct (I suddenly feel like Stan Lee here), "And with this apathetic internal rupturing we eject these components."

And as we depart from these waters, future-past, and steer the ship through the starry seas, above is Louis Bickett's snapshot of these almost but not quite forgotten left overs from In Tongues installed in the show.
Posted by J.T. Dockery at 9:46 AM No comments:

In Tongues Illustrated Future Past #8

There are all sorts of ways to travel. Prehensile.

In Tongues Illustrated Future Past #7

It's hard to get past one's own self. Or it can be.

In Tongues Illustrated Future Past #6

It's easy to let things go.

In Tongues Illustrated Future Past #5

"Still keener hunters," long before I was thinking about this blog, is a line I copped from Herman Melville's Confidence-Man, but the sentiment is in fact mine.
Posted by J.T. Dockery at 11:49 AM No comments:

In Tongues Illustrated Future Past #4

Answering the questions you forget to ask yourself with more questions.

In Tongues Illustrated Future Past #3

I was riffing/ripping off poet Charles Olson. Or was it Ezra Pound? If one can't remember from whom one is stealing, does that make for an original statement? I ponder these things and just like I said back when, "If I knew what I was doing I could wish to tell you."

In Tongues Illustrated Future Past #2

Cute and cuddly can lead to a certain disquieting darkness. Slugs of unknowing and other monsters of discontent often slide underneath. I fear what's between the lines. Or to quote Redd Foxx on the subject of violence, "I wouldn't slap a crippled sissy."

In Tongues Illustrated Future Past #1

I found a scanner buried behind the barn. It's not the best scanner, but it'll do for one that I dug up from under the dirt.
Speaking of finding things under the dirt, last Feb. when I had a Lexington gallery installation of the original pages from my book, In Tongues Illustrated, I discovered in my archives a collection of strips, almost more like sketchbook drawings, which riffed on the content of the book. I had at one point fiddled around with the idea of running these strips along the bottoms of some of the larger pages in the book. That idea got scrapped, and the drawings put up and forgotten about until the show.
So now, in the spirit of full disclosure, I'll post a series of these aforementioned "lost" outtakes/deleted scenes.
In this installment, we see that "Cosmic Denial" ain't just a river on the outer rings in the X-R41 Nebula. Is the astronaut at left preparing to fix some unseen mechanical issue with the tool in his grasp, or is it a weapon with which he is about to attack? I wouldn't mess with the guy in the foreground, if I were me. The character in the background, over the horizon, seems to be throwing an ineffectual punch, or is is more of just a showing, "terroristic fist bump"-style, of solidarity? These issues seem like, as Rummie put it, "known unkowns."
Posted by J.T. Dockery at 11:49 AM No comments: 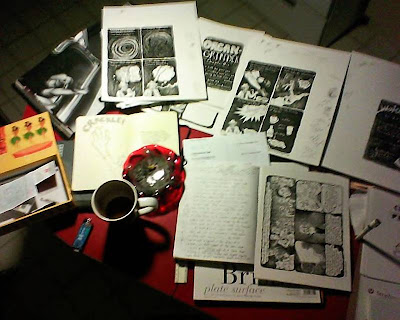 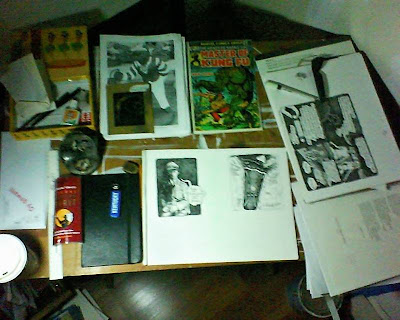 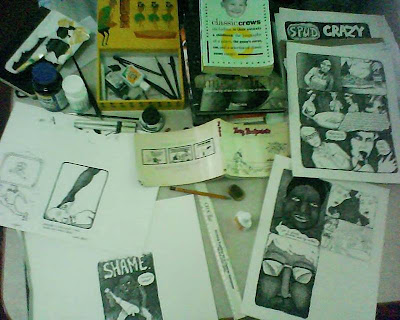 Chase Martin over at the Institute 193's blog pays me a "studio visit."
Same old song. I'm miles from the nearest scanner in my current incarnation. Also, barely touching a sketchbook right now as I'm knee deep in cranking out new pages of Spud Crazy to the exclusion of all else.
Some day, as the man said, this war is gonna end.