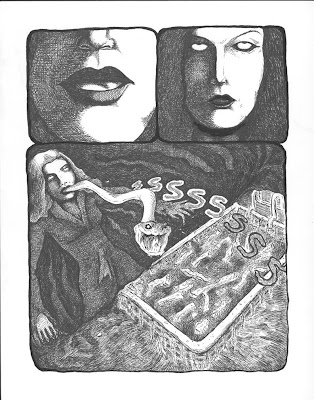 Let's go crazy. I think Prince said that. Yeah, this is the week. The scene is Lexington, KY.

I think I'll grab my coat, hat, and cane and get myself to the world premiere of the new Harry Dean Stanton documentary at the historic Kentucky theater on Wednesday. Then I think the next day I'll stroll down to the opening reception for the art show and release party for the limited edition excerpt of Spud Crazy by Nick Tosches and yours unruly at Institute 193.

Not only is it a book, it's a soundtrack of new music again by me, Robert Beatty, Brian Manley, and Justin Eslinger. Not only is it an opening reception for an art show, Manley & Eslinger (with an unnamed Theremin player) will perform sets of live music during the reception to provide another variation on this tuber theme.

Then at some point in there I'll celebrate my birthday on the fifth, probably with a fifth, and think of William S. Burroughs, who shares the same 2/5 with me as an inception date. My thoughts will most likely consider Burroughs's time in Lexington at the Narcotics Farm. Then I'll probably study upon the fact that Richard Hell, who wrote an intro for this Spud edition (and published a book of Tosches's poetry on his CUZ imprint), is originally from Lexington. Then I'll consider that I almost forgot Hubert Selby, Jr., who was the catalyst for the initial correspondence that would eventually lead to Tosches and I collaborating on this Spud plane we all now live on, and, oh well, yeah, his father was from Kentucky. And with all these thoughts in my head, I'll consider that Spud cigarettes were manufactured in Kentucky.

Then I will take a drink with my smoke and forget about Kentucky and forget about myself and Spud Crazy will seem the sanest game in town. My town, your town, any town. As Nick Tosches might put it, "Are you hip to Cybele?"
Posted by J.T. Dockery at 4:25 AM No comments: