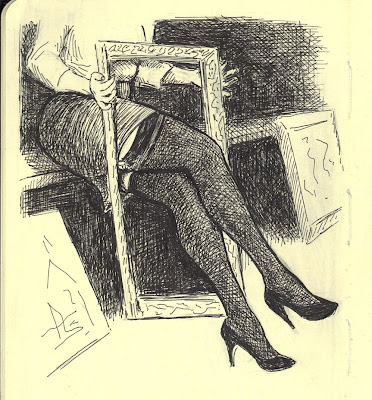 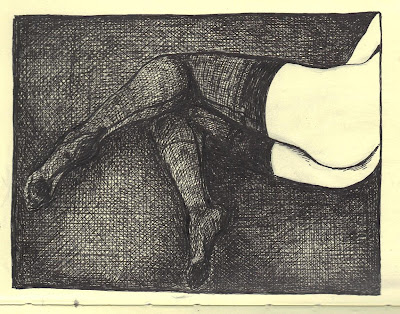 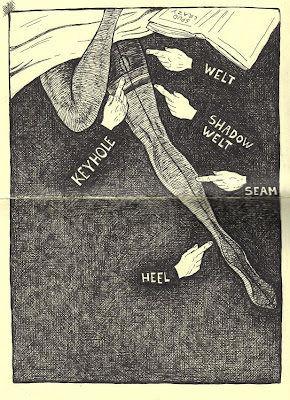 "Yeah, she was a tease but isn't every woman worth a damn?"--Elmer Batters on the subject of his favorite model.

Meanwhile, back to man's favorite pastime...further sketchbook journeys in the game of gams...

I got asked recently if Crumb influenced my preferences. The answer to that is no. These things were evident to me, in an early form, prior to being familiar with Crumb. Up to a certain point in my late teens, I'd only ever seen the cover to Zap #0. At first it was somewhat dim, but my self-awareness of being a "leg man" was fairly concurrent with puberty itself. How Crumb did influence me later, however, was to empower me to not tuck away my predilections away in the shadows.

That said, Sexton Ming lifted the phrase "crumb girl" from me for his album of the same name (which is explained in the liner notes of this now out of print disc). Sexton and I have gone on at length delineating the female form. Sexton likes "meaty," as he puts it, legs. His lovely wife has meaty legs. I like meaty legs, too.

Of course, there is a fine tradition of skinny leg men chasing big leg women, but what's more important to me than any specific size is the shapely femininity of a woman's legs, that roundness which appears to define womanly shape vs. manly shape. I've started thinking of women as Shapely Superclusters.

"What's up with the stocking thing?" you might find yourself asking. It's a multi-layered subject, complex. We won't solve the mystery here, but here's a few scattered sentences on the subject. For one thing, if this were the 1940s, the jive I'm putting down would be considered normal, and you un-initiated would not be asking me so many questions. Hosiery is pretty cool in general, but really, it is the classic fully fashioned nylon stockings which produce a more fully developed consciousness. Fundamentally, it doesn't matter. But if we have to wear clothes, I know what I like on the ladies, and there's something about the manner in which a fully fashioned stocking frames a woman's leg that just works for me. It's like explaining why one likes a certain song, a certain sound; after a certain point words fail. The way a stocking appears, as if a lovingly cross hatched diaphanous layer in reality, is similar to the way I draw and in essence see the world in general. It all works together.

I wear suspenders for men: dress shirts, dress hats, undershirts; I'm layered as well, and wouldn't ask any woman to consider anything that I'm not prepared to do the masculine version of myself. All you louts that go out in public in your sweat pants can hang out together and talk about how I'm a weirdo.

This episode of Leg Art Comics brought to you by Secrets in Lace.
Posted by J.T. Dockery at 7:01 AM

Yowza, yowza, yowza. Me and Anton LaVey down by the schoolyard.

Although I prefer the human body as undraped as possible, there is a most holy process surrounding "the stocking thing", of which Col. Dockery is a sacred scribe and annointed monk.

The pan-chronological nature of good old-fashioned legwear has mythic resonance that's bigger than the both of us, and it takes a Steampunk mind to get it. Some people, alas, were not put on this Earth to "get it".

To give old Elmer some credit in context, he was actually talking about what inspires love is not physical attributes or even his own fetishes but rather the personality of his favorite model. THEN, considering her exhibitionism, he added that last bit as kind of a punchline. Look, you can josh all you want, putting some of my own stuff out in the world actually makes me feel pretty vulnerable, open for ridicule. I'd say I got plenty of ideas, good or bad. Ain't up to me to decide. I just do what the ink pen tells me.

hey, thanks for taking it so well. i've got a Hunch that we have some music tastes in common